Fruit House is a small family business founded by Naricha Kulnananth, a hard-working woman who determined to produce and sell quality processed fruits.
Fruit House was originated from that fact that Naricha had knowledge in science from KhonKaen University and had worked with the Royal Project Food Processing Section in several departments, namely Production, Quality Assurance and Research and Development. Later on, she could not continue to supervise the Project’s four factories in four provinces due to personal responsibility in taking care of her parents and children. So she resigned and moved to Chiang Rai along with her family.
In the meantime, she became inspired to start her own business, being a community leader in bringing His Majesty the King’s concept of sufficiency economy into operating agro-industry business and helping the community to achieve self-dependence. Using her prior experience, she tried to process fruit in a small oven at home. At the same time, she took a teaching job in food technology and food analysis as to help revise her knowledge. Also, she had the opportunity to be a consultant on fruit processing for Boonrawd Brewery’s farm.

After succeeding in inventing products and having everything ready to open the business, the company was registered as FRUIT HOUSE in 2002, with the mission to produce quality products that has no flavoring or coloring agent and contains as little sugar as possible, if not at all. Moreover, chemicals used have to be at the minimum amount and the flavor has to be similar to that of the natural products. Jirateep Patmayothin, a former lecturer at King Mongkut’s University of Technology Thonburi and a former senior engineer at the Royal Project, is the company’s consultant and the engineer who invents and makes adjustments to the machines such as hot air oven, apple peeling machine and pineapple core remover so that they would suit gastronomical business’s needs.

Upon attempting to sell the products in the local markets, we realized that only certain groups of customers could afford the products and understand the difference between Fruit House’s product and other processed fruit products. Having the target customers in mind, the company opened its own store at Chiang Rai International Airport in 2002. We received positive feedbacks from the target groups, making Fruit House well known and eventually we were invited by the Department of Export Promotion, Ministry of Commerce to participate in Thailand Food Exhibition and other domestic and international events. 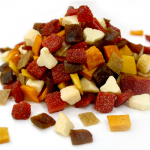 Our products were selected to be a five-star OTOP (One Tumbol One Product.) or One Village One Product (Champion Product) in the category of dehydrated fruits in 2004 and has been selected every year ever since. In 2007 Siam Paragon and Emporium, the leading department stores, selected Fruit House to sell the products at their stores, attracting numerous international customers. Furthermore, the company supplies fruit filling and paste for Thai Airways International and several other companies.

However, due to strict quality control, careful transportation and insufficient ingredients, we are unable to produce a large amount of products as to respond to international customers’ need.
Since 2002, Fruit House has always believed in gradual and constant growth without rushing by borrowing a large sum of money for expansion. Therefore, economic or political problems only affect our company at a small degree. We are certain that sufficiency economy is the best way to run our business. Even though we have to expand into an SME business, we would always hold on to His Majesty’s way.